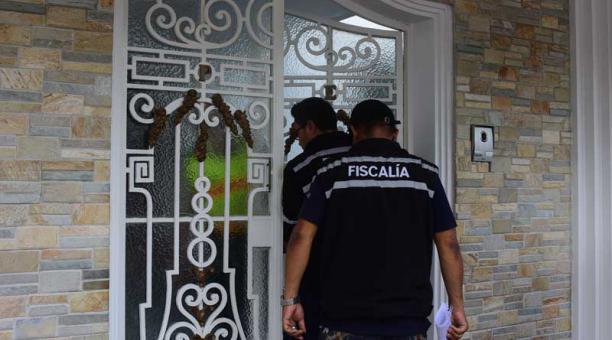 The Office of the Prosecutor traces the final fate of the Odebrecht money. This entity confirmed that there are two open investigations to establish where the millionaire bribes paid by the construction company are. One of the files already records progress. “We have more than suspicion, (we have) data,” said yesterday (January 8, 2018) the prosecutor Carlos Baca. And he assured that the scheme used to hide those funds is similar to the framework created by Odebrecht.

“They are environments of relationships, of ghost companies; (the money) is disseminated in different countries, of transit in third persons “. In mid-December, Baca already revealed to this newspaper that Odebrecht’s money was in private and immovable works. What are those? A part of the illegal funds is in the submarine cable, a private work that provides Ecuador with fiber optics.

That track is from the Prosecutor’s Office, but this Monday was confirmed by Jorge Zavala, a lawyer for Tomislav Topic, a Telconet shareholder. That firm is part of the Pacific Caribean Cable Systems consortium, which was in charge of the construction and operation of the submarine cable. However, the jurist said that Topic, and his son Jan, were not part of the plan to hide the illicit money. The Office of the Prosecutor established that Telconet received USD 13.5 million from Glory International Industry Corp.

Glory, in turn, had received 5.5 million Odebrecht, through an account in Hong Kong. These transfers, made between 2012 and 2013, were made through five companies that were identified in the trial against Jorge Glas. While in Asia these disbursements were made, in Ecuador the Topic negotiated with Glory the financing of the submarine cable, according to the Prosecutor’s Office and the lawyer of the businessmen. Jan Topic, Telconet’s main shareholder, told the Prosecutor’s Office that neither his father nor he met Glory’s representative, Michael Ying, and that these negotiations were made via Skype, by mail, and through Ricardo Rivera, uncle of the former vice-president. Glas.

Also, he acknowledged that the payments were received by him. Between 2012 and 2013, Glory of Hong Kong transferred money to a Glory account in the USA. “From there it happened to an account that Jan Topic had in the United States”, summarizes Zavala, when it refers to the route of economic resources. Under the agreement, to finance the submarine cable, the Chinese had committed to cancel USD 30 million. But as they paid only USD 13.5, Telconet used a clause and did not return that fund, but invested it in the submarine cable. “All that money, which if it was true, was contaminated with Odebrecht, does not come out (from the submarine cable) to the scrubbers or transform into actions for Glory,” says Zavala. According to him, the money is there and “never entered the market with the appearance of legitimacy.”

The lawyer warns that his clients did not hide from investigators where the money for the submarine cable came from. Although he claims that they learned of the illegality only when the Odebrecht scandal broke.

US criminal assistance links Rivera with the Glory company in Hong Kong. In that document, the amounts, works and recipients of the bribes of the construction company are hidden by codes. One of the payments says ‘Glory’ and ‘Manduriacu’. And there is talk of a transfer for USD 150 000, which is addressed to alias ‘Uncle’. For Aníbal Quinde, Rivera’s lawyer, the relationship between his client and Glory “is mere speculation of the Prosecutor’s Office. “Clarifies that the nickname ‘Uncle’ is a conclusion without sustenance and that “Uncle can also refer to another defendant or Mr. Yin”

In his statement, Rivera said he met Yin in 2010, but his lawyer emphasizes that transfers began in 2012 and that Rivera was not the beneficiary of Glory. Other assets investigated Odebrecht’s money was also spent on real estate and vehicles. In addition, the Office of the Prosecutor investigates the use of the USD 10.1 million allegedly received by former Comptroller Carlos Pólit. The former official has a house in Guayaquil, which is confiscated, and a house in Miami, in the US, where he currently lives, a fugitive from Ecuadorian justice.

In the same US criminal assistance, with the nickname ‘Miami’ is identified the recipient of payments for USD 1.2 million made through the companies Plantiquin and Consani, linked to Pólit. Another million dollars in bribes was used to buy machinery. The Prosecutor’s Office maintains that this money was delivered to the former Minister of Electricity Alecksey Mosquera, in 2008. The fiscal opinion on this case will be known tomorrow.  (I)