Two people deprived of their liberty revealed how Balda was plagiarized 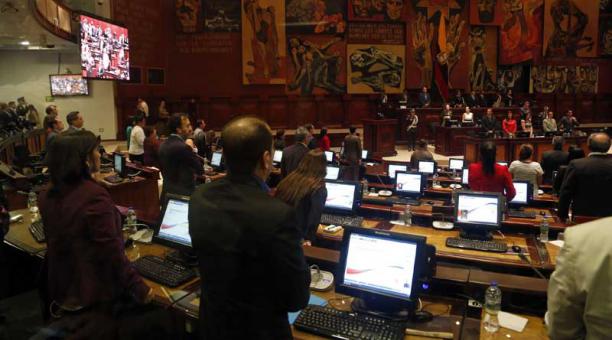 The order that the kidnappers received was that they would hand Fernando Balda “without a single scratch”. They had to sedate him, take him in a car and deliver him to a point in Bogota. These details were obtained by the Colombian Prosecutor’s Office, after Jhonathan Uzuriaga and Karim Shek decided to cooperate with the justice of that country.

Four others arrested for this kidnapping also accepted their participation in the crime, but did not provide details. In his version, Uzuriaga said to be friend of Shek from the childhood and that he contacted him for “a work that consisted of kidnapping a person”. The victim allegedly was “someone unimportant”, who was dedicated to fix computers and plagiarism was to be responsible for the pregnancy of a young woman who had left abandoned in Ecuador.

For that “job”, Shek offered to pay 10 million pesos, which at the time (1,800 pesos) meant USD 5 555. But Uzuriaga asked for 30 million pesos, about USD 16,666. Thus they reached the agreement. These data are now in the possession of the Ecuadorian Prosecutor’s Office, since Bogotá sent them through criminal assistance.

During the investigations, Shek said he was contacted by an Ecuadorian policeman and that he asked him to do the “job”. Since there were no collaborators in Bogotá, he mobilized people of confidence from Puerto Tejada, in Cali. To do so, the Ecuadorian agent provided the plane tickets. He also said that this policeman gave him money to lodge the people who would participate in the criminal operation and to buy branded clothes, because “they should be well presented for dinner in a very luxurious restaurant.”

Shek also explained that the agent was always accompanied by a woman. When Uzuriaga spoke at the Prosecutor’s Office, he confessed that they also received money to buy cell phones and stay connected during and after the kidnapping.

Finally, the crime was perpetrated on August 13, 2012 and Shek only paid 10 million pesos to the authors. In his statements, Uzuriaga said that everyone accepted the value. After the plagiarism, one of the involved ones was captured in Bogota, the following day of the fact.

In Ecuador, the complaint was filed in 2013 and in 2018 the first steps began. Three intelligence policemen were arrested for their alleged participation. Among the evidence included in the file are migratory movements of the accused, which indicate that they were in Bogotá on the date of the kidnapping.

In addition, there are two checks from the Bank of the Pacific drawn from the Directorate General of Intelligence of the Police (DGI) in favor of one of the detained agents. The first on June 6, 2012 for an amount of USD 10,000 and the second on June 8 for USD 11 280.

According to the Prosecutor’s Office, this money was used to pay part of the illegal operation. In the version rendered by Carlos Aguirre, financial chief of the DGI, on March 13, 2018, he indicated that the Secretariat of Intelligence (Senain) assigned resources that had to be deposited in the current account of a private bank and that this was delivered the money to the agents processed.

When the prosecutor asked her about the procedure that was carried out in 2012 to pay, Aguirre said: “The agent requesting the resources presented to the director or his delegate the work that was going to be done … and through a memorandum authorizing the delivery of resources requested and the corresponding check was issued. ”

Fausto Tamayo, director of Intelligence at that time, gave his free and voluntary version on March 16 and when the prosecutor showed him the copies of the checks he said: “I must state that as these checks in my period as General Director of Intelligence are due have turned many more to different officers. ” And he stressed that “never allowed operations that were not those that the Law, ethics and morality forced us.”

The debate in the Assembly Supporters of former President Rafael Correa called on their bases to demonstrate in front of the Assembly on Thursday afternoon, June 14. The objective is to reject a possible decision of the Legislative to allow the former presidents link to the criminal case of the Balda case.

María Mercedes Cuesta, from Fuerza Ecuador, pointed out that the aim is to create commotion. The statements were given on Wednesday after the vote of the House in which it was not possible to advance the debate on the request of Judge Daniela Camacho, for the Assembly to authorize criminal prosecution. The judge argued, in a letter sent to the Assembly on Tuesday, that seeks this pronouncement “so that subsequently the lack of any procedural requirement is not alleged.”

In that request, she cites Article 120 of the Constitution. The regulation establishes that the endorsement of two thirds of the Legislature is necessary for the criminal prosecution of the President or Vice President, when the competent authority requests it with fundaments

It does not indicate that this requirement must be met in case of  former presidents. On Wednesday, the Assembly tried to pronounce itself. The correístas legislators and the majority of morenistas voted against the change of the agenda that made the independent legislator Fernando Burbano.

In 2013, Balda denounced the incident in the Ecuadorian Prosecutor’s Office and the investigation was reactivated on January 23 of this year. There are four detainees: three policemen and the former director of Intelligence. In addition, there is a warrant for imprisonment against a former director of the Senain. (I)

The Funka Fest looks to the future from the south