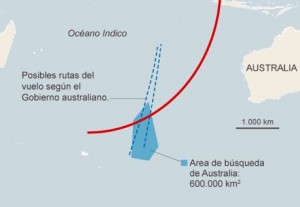 Australia detected last Sunday two objects floating in the sea that could be the remains of the missing aircraft 13 days ago with 227 passengers and 12 crew members on board, which took off from Kuala Lumpur with destination to Beijing. The information was made official today.

The Prime Minister of Australia, Tony Abbott said to parliament: “It appeared new and credible information related with the search of the MH370 Malaysia Airlines flight, in the South Indian Ocean.”

“The Maritime Safety Authority of Australia has received information based on satellite images of possibly objects related to the search. After the analysis of these images by the specialists, two possible objects related to search have been identified,” Abbott said.

For its part, Australia has sent four planes and two ships to the area, but Abbott has warned that “the location of these objects will be very difficult and could result that have nothing to do with the MH370.”

The Australian authorities have reported this Thursday that they suspend the search operations of the two objects, because it is nighttime in Australia.