Criminalistics of the National Police has spent 18 days tracking down identifications of bodies that are in the mobile morgues of the Hospital del Guasmo Sur. The researchers employ two techniques: the fingerprint and the anthropological. 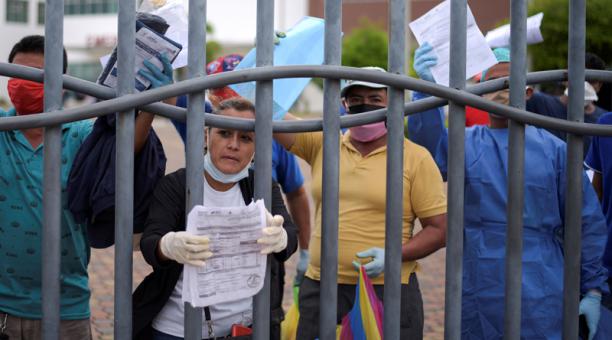 In the first, fingerprints are taken from the hands and checked against the data from the Civil Registry . Instead, the second is to identify specific characteristics of the body, such as height, skin color, hair color, moles, tattoos, prosthetics, injuries, among others.

The researchers then interview potential prospects for more personal information . This last technique is performed when the bodies are in a degree of decomposition that does not allow fingerprints to be obtained.

The Office of the Prosecutor ordered that the anthropology technique be used. These skills are part of an investigation that the entity carries out for an alleged negligence in the handling of corpses of three hospitals in Guayaquil: that of Guasmo, Teodoro Maldonado Carbo and Los Ceibos of IESS. The complaint was filed by the Governor of Guayas, Pedro Pablo Duart, on April 9, and went to the Public Administration prosecutor, César Suárez Pilay.

The Office of the Prosecutor also investigates the non-compliance with protocols in the management of the bodies ordered by the National COE , in the context of the pandemic by covid-19.

According to the institution, 237 decomposing bodies were found in five containers of the health houses , of which only 106 have been identified with filiation data and another 131 are in the process of identifying them.

But these corpses would not have been the only NN. Jorge Wated , in charge of the Task Force, which manages the uprisings and burials of the deceased, says that at least 125 more bodies have already been identified. But he did not clarify if they correspond to the group of 237.

The official also claimed that the bodies under investigation would correspond to the people who died in March, before the Task Force was created.

The period indicated by Wated coincides with the wave of deaths recorded by Guayas. According to the Civil Registry (RC), last March 4 477 people died in the province, when in the same month of 2019 there were 1,909 deaths.

Since March 23, the families denounced the delay in the removal of bodies in the homes . There were even those who took them to the streets and sidewalks to avoid possible infections. In addition, the collapse of funeral and cemetery service providers was recorded .

According to the RC, Guayas ended April with 8,685 deaths from various causes; that is to say

6,823 additional deaths to the data for the same month of 2019, which were 1,862. April 4 was the day with the highest number of death certificates registered in the month: 634.

Reports from the Task Force also indicate that the identity losses occurred because hospitals broke the cold custody chains . “They allowed people to enter the morgues and remove the bodies. There the identifications were lost, ”Wated said.

As of Saturday, the government had already managed 1,300 burials. To this group will be added the bodies that are now being identified by 30 members of Criminalística . Specialists have already contacted 50 families to collate the data. There is part of the relatives of a list of 83 deceased that Héctor Vanegas , councilor of Guayaquil , presented to the Government and the Prosecutor’s Office . The official indicated that among those reported are people who have been deceased for more than a month.

One of those cases is that of Ítalo Suárez. He has been searching for 38 days for the body of his stepfather Jorge Alberto Cedeño Zambrano , who died of covid-19 at the Infectology hospital in Guayaquil. The same day, his grandfather , Vicente Segundo Gómez, also lost his life to acute pneumonia. The bodies of the two were transferred to Guasmo.

On Friday, the young man learned that his grandfather is buried in the La Paz churchyard in the Pascuales parish . But his stepfather still doesn’t know where he is.

Cases like these have also been analyzed by the Municipality of Guayaquil. A Victims Commission has a registry of 1,311 people who died at home , between March 31 and April 14. A report from this entity also details that during the first days of the emergency, the ECU-911 system collapsed.

The director of the emergency system, Juan Zapata, denied that a saturation has occurred . But he reported that between March 17 and April 29, in Guayaquil, 10 178 alerts were received for the removal of bodies in the houses. They correspond to calls made by citizens.