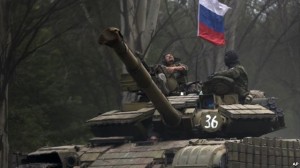 Yesterday, the United States accused Russia of firing artillery against Ukraine over the border between the two countries to attack the Ukrainian military bases that are fighting pro-Russian separatists.
The American government also accused Russia of being increasing the supply of arms to the pro-Russian separatists.
“We have new evidence that the Russians intend to send heavier and more powerful rocket launchers for separatist forces in Ukraine,” said the State Department spokeswoman Marie Harf. The official also claimed to have evidence that Russia is firing artillery from its territory to Ukraine to attack military bases.

Harf said that the information was based on intelligence reports but declined to give further details, saying it would jeopardize the sources.

Russia for its part, denied involvement in the separatist rebellion in eastern Ukraine, but the U.S. and its European allies accuse Moscow of nurturing, training and arming the rebels.