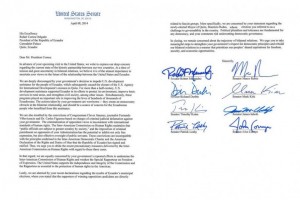 Democratic leaders and Senate Republicans sent a letter yesterday with claims to the Ecuadorian president, Rafael Correa, including the “criminalization” of opposition voices.

Specifically, they criticized the decision to “prevent” the help of the U.S. Agency for International Development (USAID) for Ecuador, the sentences of Assamblyman Clever Jiménez, journalist Fernando Villavicencio, and Carlos Figueroa, accused of defaming the government, and attacks of the president against the new Mayor of Quito, the opponent Mauricio Rodas, who is linked to a plan to boycott the government according to Correa.

They also urged President Correa, to “strengthen” democracy in that country and repair the bilateral relationship between both countries.