U.S. suspended the issuance of visas in Venezuela due to lack of staff 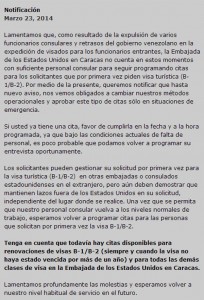 U.S. suspended the issuance of visas in Venezuela due to lack of staff

The Embassy of United States in Venezuela reported today the momentary suspension of the issuance of visas for tourists since they do not have enough staff to make arrangements after the expulsion of several officials in recent months.

They also explain that only visas for “emergency situations” can be issued. “If you already have an appointment, please meet on the date and at the scheduled time, since under current conditions of lack of personnel, it is unlikely that we can return to schedule your interview time”, explains an statement.

Applicants, in addition, can manage an application for a tourist visa for the first time “in other embassies or U.S. consulates abroad”, says the statement. When the U.S consular staff return “to normal levels of work” the rescheduling of appointments will be held.

The United States avoided the last week to respond the offer of the President of Venezuela, Nicolás Maduro, of starting a bilateral dialogue about the protests which have lasted for more than a month, but insisted that the mediation of a third party is “essential” to resolve tensions between Government and opposition.