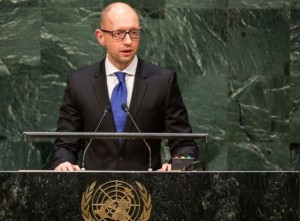 Ukrainian Prime Minister Arseniy Yatseniuk, this Wednesday urged western countries to not lift the sanctions against Russia while Ukraine does not recover its “entire territory.”

During the General Assembly of the UN, Yatseniuk once again denounced “the Russian invasion of eastern Ukraine” and called to “not lift sanctions until Ukraine has not regained control of all its territory.”

“We do not trust in the words, we believe only in the facts and events,” said Yatseniuk, who asked Russia to “respect its international obligations and the twelve points of the ceasefire agreement” of Minsk, signed on September 20.

Before the intervention of Yatseniuk, President Barack Obama promised to the General Assembly that Western countries would lift sanctions if Russia chose “the path of diplomacy and peace.”

Yatseniuk also denounced the attitude of Russia, which “is a member of insecurity, rather than from the Security Council,” of the UN.