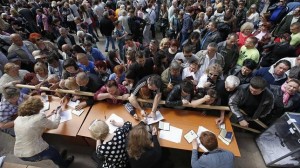 The pro-Russian separatists in eastern Ukraine began voting yesterday in two districts in the Donetsk region, fearing that pro-government forces attempt to prevent the the controversial referendum on independence in Kiev, summoned for today.

Despite international callings to cancel, including them of German Chancellor Angela Merkel and French President François Hollande, the separatists said they were ready for the query.

Although according to experts have barely had access to records of voters in the region. The vote will take place between 08:00 and 22:00 local time. At the moment there’s not known when they will announce the results.

The Kiev government does not recognize the referendum, which also rejects the United States and the European Union (EU). In the Donetsk region 1,527 polling stations were established, said the head of the electoral board of the pro-Russian.

“The result of the referendum will be considered valid regardless of participation,” he added.