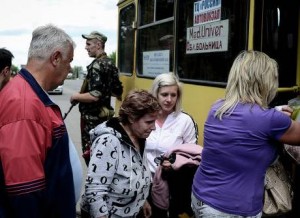 The Ukrainian Military High Command has announced the opening of humanitarian corridors for civilians to leave the cities of Lugansk, Donetsk and Gorlovka, currently under the control of pro-Russian separatist militias.

The humanitarian corridors, one for each of these three cities, will be open between 10.00 and 14.00 local time (07.00 and 11.00 GMT), said a statement from the command of the Ukrainian forces, which fight separatists in the east.

Each corridor, according to the statement has a clearly established path and during the period of its operation Ukrainian troops will not fire within 200 meters from it along the entire route.

Ukrainian military officials have warned that those who retain civilians in combat zones or prevent their departure through humanitarian corridors will be deemed “war criminals” and pursued by international laws.