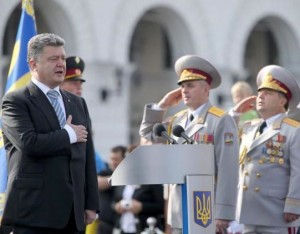 The President of Ukraine, Petro Poroshenko, said that the Ukrainian government will invest about three billion dollars to rearm its military and deal with the “threats” to their sovereignty, referring to the fighting it lives in the east of the country against separatists.

During the opening speech of the military parade, in which Kiev celebrated yesterday the 23 anniversary of the independence proclamation, Poroshenko stressed that Ukraine “has shown it can defend itself.”

In recent months, “in heavy fighting, has been born the Ukrainian army,” said the president, hoping that this new “struggle for independence” will end with the victory of Kiev.

Poroshenko has ensured that war is a threat to the security of Europe and welcomed the broad support Ukraine has received from the international community.

“The European Union, the United States, everyone is with us, from Canada to Australia,” he said.