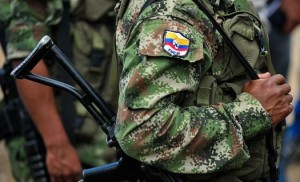 The UN delegation in Colombia this Thursday asked the FARC to respect indigenous peoples, a day after the killing of two of its leaders in the Westof the Country, attributed to fighters from the armed group.

“The United Nations expressed concern about these incidents and urge members of the FARC-EP to respect the rights to life, personal integrity, autonomy and territory of indigenous peoples,” said the organization in a statement.

Moreover, the UN said that a third member of that community was also a target of attacks of the insurgent group.

According to the organization, two members of the Nasa indigenous council were attacked on Wednesday in the township of Toribio (Cauca), while investigating an attack against another representative of the community that had dismantled an allusive fence to the former head of the Revolutionary Armed Forces of Colombia (FARC), alias Alfonso Cano.

The UN “condemns the killing of two indigenous guards of the Nasa People, Daniel Coicué and Manuel Antonio Tumiña, belonging to the guards of San Francisco and Toribio, and the attack on the indigenous guard Edgar Tumiña, events occurred yesterday November 5,” said the text.