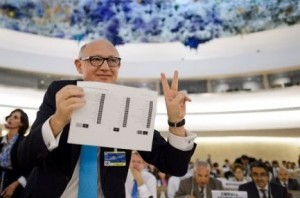 The Human Rights Council of the UN adopted this Friday in Geneva a resolution condemning the “vulture funds” promoted by Argentina, which maintains a legal battle with the hedge fund possessors of sovereign debt default.

The resolution was adopted by 33 votes in favor, five against (including the vote of the United States) and nine abstentions.

“Argentina is very proud to have achieved a remarkable victory for human rights,” Argentine Foreign Minister Hector Timerman said at a news conference.

Argentine Foreign Minister added that “the billions that vulture funds take out from impoverished south, […] result in the closure of schools, hospitals emptied of medicines, in familiy regiments scavenging to eat.”

Timerman said that despite the resolution calls for a report on the activities of the funds, the approved text “instructs the Council for Human Rights to conduct an investigation.”