Unemployment funds will be debated again in the Assembly 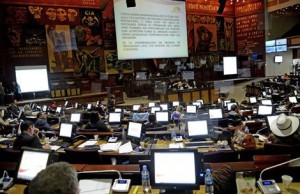 Today is expected to be resumed the debate in the Assembly to the reform that will make viable that 54 complementary pension funds are transferred to the Biess. 15 days ago the ruling party suspended the second debate without explanation.

Under the project, the funds that have received State contributions shall be administered by the Social Insurance Bank (Biess) through individual accounts.

Not all PAIS Assembly members are in agreement with the proposed reform. “The differences are necessary, it is imperative the internal debate,” said Holger Chavez.

Prefects of Guayas and Los Ríos will address border disputes