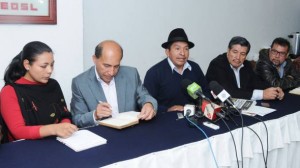 At least nine demands will be expressed by social sectors in the streets of Quito and cities across the country, in a demonstration convened on March 19 against the policies of the government of Rafael Correa, and to which a warning is added: they will not allow the presence of Guillermo Lasso, former banker and former presidential candidate by CREO, and Lucio Gutierrez, former president and leader of theSociedad Patriótica party.

This “peaceful march” as it has been called, will start at 16:00 in the capital; and it will start from the Social Security Office to the Plaza de San Francisco, to “show that there is unity of the organized sectors in which the right will not be present,” said Edgar Sarango, president of the United Workers Front (FUT for its Spanish acronym).

Despite the warning of FUT and the agreement of the organizations, both Lasso and Gutierrez announced days ago they will support this event.

“If they intend to lean out in the march, they will be removed, refrain from being present, we do not want inconvenience caused neither by banks, employers and less by the government,” said Nelson Erazo, of the General Union of Workers (UGTE for its Spanish acronym).