From personal protection equipment to access to the “best” scientific minds to try to reduce the COVID-19 pandemic, it is the support that the United States Government has made to its Ecuadorian counterpart. 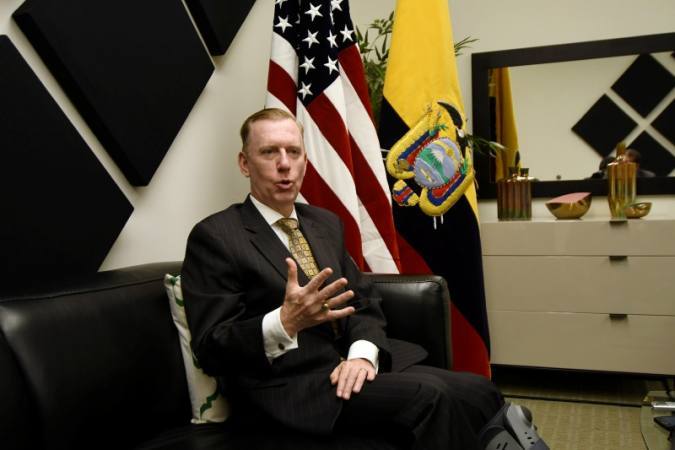 The ambassador of that nation in Ecuador, Michael J. Fitzpatrick , explains that although his country also suffers from the virus, he tries to help other nations.

What has been the help of the United States Government to Ecuador during the pandemic?

We have several channels of support with Ecuador. For more than a month we have had a team from Usaid (United States Agency for International Development) working directly with the mayor of Guayaquil. It is a team of experts, doctors, disaster specialists … Also, two weeks ago, Usaid announced the offer of two million dollars for the public health sector in Ecuador. We have many more such announcements coming in these days.

This week we will have another couple of physical donations in Guayaquil and Quito for the Police … We have already passed several donations to the Armed Forces and the Joint Task Force in Guayaquil. Ecuador received strong support from us for access to more than 600 million dollars from the International Monetary Fund and we await the approval of the World Bank for another 500 million.

We have donated PCR tests, antibodies, equipment for personal protection. We have made purchases from Ecuadorian companies to generate employment. We collaborate with access to the best scientific minds in Atlanta… We continue with trade programs.

We have many projects in the near future for private sector investments. We want to help with advice to Ecuador, reprofiling of its external debt …

There are thousands of Ecuadorians ‘trapped’ in the United States. Has the American Government given any support to these people?

It is a large quantity. In fact, we have that problem also in Ecuador. There are many trapped Americans who need to return to the United States. We have supported more than 4,500 Americans to return on more than forty flights since mid-March.

We are working the two embassies, me here in Quito and Ambassador (Ivonne) Baki in Washington and several consuls. This week alone, there will be eleven charter flights between Ecuador and the United States.

But there are complaints about flight prices …

There is a big difference in prices because it depends on the size of the planes, having access to the Ecuadorian market. It costs much more to have only one or two flights. If there are people who want to go to the north and others to the south, prices can be shared, but if not, each person will have to pay more. We are trying to lower prices.

Another one of the problems of the Ecuadorians repressed in EE. USA is that their visas, many of them for tourism, are expiring. They are afraid of having problems with the American authorities or that when they return to Ecuador they do not want to be renewed …

There are many people who find themselves in difficult situations in that regard. It will depend on each case, the status and its situation. We will work closely with the consulates to resolve.

(From the US Embassy, ​​we were sent a scope to the answer to this question and we were told that “if an Ecuadorian is in the United States on a nonimmigrant visa and is going to be longer than allowed, he must request an extension with a form I-539 at www.uscis.gov/i539enlinea ”).

What can a person who had an appointment at the consulate or embassy do?

We understand that there are people who had one foot in the door to go on a trip… We have opened the consulate for specific humanitarian cases, doctors, cases of urgent surgeries. Also, I know North Americans who live here (Ecuador) and have born their babies and do not have Ecuadorian documents. We will solve these problems as soon as possible.

Is there a diplomat infected or who returned to the US due to the situation? ?

In Guayaquil and Quito we have had North Americans, Embassy diplomats who have wanted to return to our country. We have had positive cases (of COVID-19) and thank God they have improved.

How have you handled the pandemic in the family?

I have a daughter who lives in New York. The United States has more than 75,000 dead and 30,000 infected each day and a third of these cases are in New York where my daughter is, so I understand what it is to have exposed family members.

Also living in Ecuador, having friends, with people who work for me on the front line, as head of mission it does affect me and that is why I insist on the protection of all my people, the relatives of diplomats. If someone has to travel to work with the Government (Ecuadorian), I go with necessary protection.

Coronavirus: PAHO alerts on transmission “still very high” in 7 countries in the Americas, including Ecuador