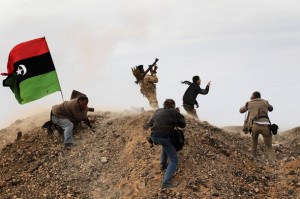 According to the New York Times, the American government began a search for a country to give asylum to Muammar al Gaddafi. However the recent accusations of the International Criminal Court in The Hague accused the Libyan leader for the atrocities committed during the revolts and the attempt against a Pan Am plane in 1988. USA officials have a list of countries that could take in the Libyan leader.

President Barack Obama and his officials informed that they are currently looking for countries that have not signed the Rome treaty. Which demands that signed countries to deny the entry of any person accused by the International Criminal Court.

This option allows the possibility for Gaddafi to find a shelter somewhere in Africa, were some countries have not signed the treaty. Meanwhile the Libyan rebels retreated yesterday to Ajdabiya due to the heavy artillery fire from Gaddafi forces. The hostilities have left a total of 14 casualties and over 50 wounded.