Uribe accuses media of supporting terrorism and to the Colombian government 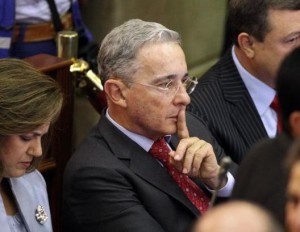 The senator and former president Alvaro Uribe will momentarily withdrew this Wednesday of the Plenary of the Colombian Senate accusing various media of supporting terrorism and to the President Juan Manuel Santos of support this legislative session.

“I retire to address the Supreme Court to file evidence of greater importance of this debate supported by the terrorist group FARC and publicized by Telesur, Canal Capital, media sponsors of terrorism,” said Uribe .

The Senate held a debate of political control over paramilitaries and had generated great expectations in the population, because Senator Ivan Cepeda assured that would link Uribe with the so called ‘paramilitaries’.

Before getting up from his seat and leave the Senate, Uribe said that “the debate is also supported by the President of the Republic”, however promised to return.

Israelis, Palestinians and the UN concrete agreement to rebuild Gaza