US Ambassador highlighted areas of investment and legal security 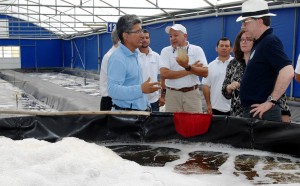 Opportunities to improve trade relations with Ecuador in tourism, technology, agriculture and health sectors, were emphasized yesterday by the new ambassador of the United States, Todd Chapman, during breakfast he had with members of the Ecuadorian American Chamber of Commerce (Amcham), in Guayaquil.

Chapman was appointed by US President Barack Obama, and then ratified by the US Congress. Before coming to Ecuador he was Undersecretary for Political and Military Affairs in the State Department.

Although he referred to these four areas based on his personal experience during his first month in the country, he noted he aims to expand bilateral cooperation in all fields.

Alarm in the agricultural sector