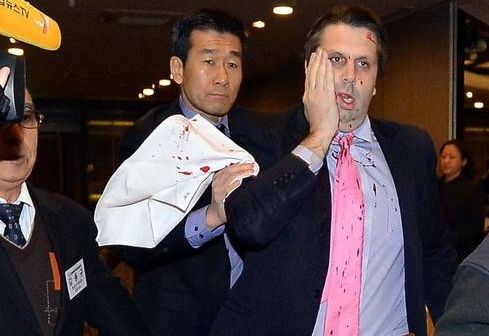 The US ambassador to South Korea, Mark Lippert, was wounded during an attack on Thursday in Seoul, according to local media reports.

Television footage showed a stunned Lippert looking his left hand covered in blood and placing his right hand on a cut on the right side of his face; his pink tie was splattered with blood.

The TV broadcaster YTN reported that the assailant, 55, and identified only by his last name Kim, shouted: “North Korea and South must unite.”

The State Department condemned the attack, which occurred at a performing arts center in Seoul when the ambassador was preparing to present a lecture.

Lippert, 42, became US ambassador last year. His wife gave birth in Seoul and his son has a Korean name.