In order to simplify procedures and facilitate the exports of more than 2,900 small and medium-sized companies, and of actors from the popular and solidarity economy, the Ministry of Production, Foreign Trade, Investments and Fisheries signed several inter-institutional agreements with entities on July 26. related to foreign trade. 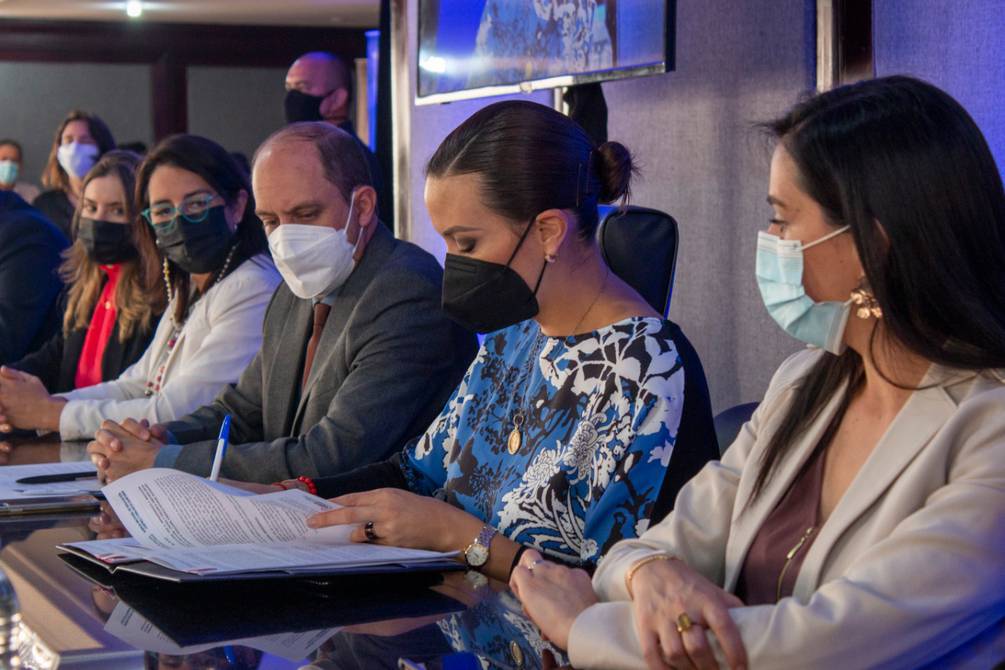 Ana Karina Ramírez. Executive Director of Arcsa, signs one of the agreements for the simplification of procedures and facilitation of exports.

After the signing of the agreements, Julio José Prado, Minister of Production, Foreign Trade, Investments and Fisheries, highlighted the presence of all the actors that have to do with the facilitation of export processes, including the representatives of the four vice ministries attached to your state portfolio.

“We want to give a clear signal, not only of sight but also of execution,” said Prado, who cited three lines of work on the path of facilitating exports. The first is the signing of commercial agreements, the intelligent commercial opening with all the markets of the world. “We have to be in the markets where exporters and exporters want to be,” he said.

The second, Prado continued, is to make Ecuador a Latin American investment destination.

At this point, he regretted that Ecuador being a currently dollarized country only attracts less than 1% of gross domestic product (GDP) and its neighboring countries up to six times more. However, he announced that “soon they will see a large number of investment contracts in strategic sectors and until the end of the year they will break several goals and milestones.”

And, finally, the internal competitiveness agenda, in which he highlighted actions that are being developed to benefit industries.Among these, 81 industries in Ecuador will benefit from a tariff reduction as of August 1, the most important in the last decade, said the minister, who said that 40% of subheadings subject to prior import control were also eliminated.

He also revealed that there is a group called The public-private workforce, made up of 35 actors from the private sector and 20 from the ministry, and that they are gathered for the reactivation of production in the Espol, training in methodologies of strategic collaboration and innovation for the reactivation productive.

For this, he indicated, they have brought a team from the United States that has worked in crisis areas and come for the first time to Latin America, to Ecuador, to meet in 22 worktables, 11 in Guayaquil and 11 in Quito in person, with different sectors. He added that one of the goals after this training is the start-up of 20 industrial clusters.

Meanwhile, during the event, which took place in Guayaquil, Lorena Konanz, Vice Minister of Production, announced the reactivation of the Exporter Route, through the Exporter Services Balcony.

The official explained that a clear roadmap was developed for each entrepreneur to be trained in the main axes for exporting and added that they will also be trained in electronic commerce, training that will be supported by the e-commerce Training Program, Payment Methods and Networks.

For his part, Jaime Lozada, representative of the consulting firm Jica, made an analysis of the current situation of the export sector. He acknowledged that there has been a slowdown in total exports in recent years, but also stressed that apart from this there is a dynamism in non-oil and non-traditional exports, and that based on this they outlined the project of the Exporter Route.

He explained that the basis of the Exporter Route is a methodology that helps a potential evolution that is promoted in quantitative and qualitative methods, incorporates a series of services to give the evaluation and comprehensive monitoring of exports of small and medium-sized companies and in improving their capabilities, in addition to taking advantage of digital trends to develop much more dynamic and accessible services for users.

He added that the route is based on a pyramid of services that will not be articulated or provided only by ProEcuador , but through the inter-institutional collaboration of entities such as the Ministry of Production, the Senae, universities and consulting companies, in search of greater articulation and use of business resources.

Meanwhile, in what has to do with ProEcuador, Lozada stressed that services such as a platform and a website, inter-institutional articulation, the diagnosis of the export capacity of organizations and the link with export projects have been incorporated.