Notices at the entrance doors warn citizens that from this Thursday, December 2, 2021, government entities require the presentation of the vaccination certificate against COVID-19 to those who go to these dependencies to carry out any procedure or management. 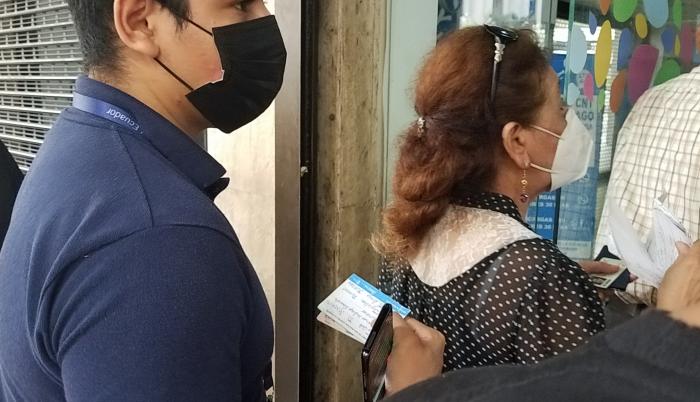 With their vaccination card in hand, a citizen waits his turn to enter a public entity to carry out a procedure.

The decision is part of the recommendations of the National Emergency Operations Committee (COE), as a prevention against the possible presence in the country of the omicron variant of SARS-CoV-2, the virus that causes COVID-19, announced at night last Monday by the President of the Republic, Guillermo Lasso.

However, its application causes surprise to some users who are not used to carrying the document and, even, who have not yet downloaded it from the website of the Ministry of Public Health (MSP).

For example, in the Civil Registry agency located on 9 de Octubre and Pichincha avenues, in the center of Guayaquil, there were citizens who expressed their displeasure at the demand and argued with the guards, despite the fact that they reminded them that the measure it had been announced by social networks and the media.

“I don’t watch the news,” replied a grumpy user, who argued that she could lose her turn due to this new requirement. Instead, other people were rushing to find their physical card or download the certificate with the QR code to enter.

The guards at the Internal Revenue Service (SRI) agency across the street seemed to be doing better. The guards explained the measure, although they also told users how and where they could download the card.

In the agency of the National Telecommunications Corporation (CNT), located in Luis Urdaneta and Boyacá, the measure surprised users, but it did not cause as much discomfort as the fact that, after noon, invoices could not be canceled for a problem in the system.

The provision for now applies only to government public entities. The Municipality of Guayaquil indicated to this newspaper that this was announced by President Lasso in his speech and that, therefore, the Buenos Aires city council was not demanding a card from those who come to the institution.

Neither are private entities that receive hundreds of users daily, such as banks. However, what is maintained is the application of disinfectants to the people who enter, the capacity and the social distance.