Venezuela and Argentina closed 2013 with inflation 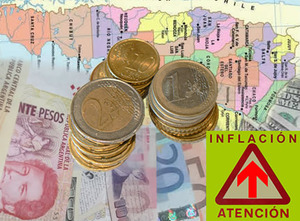 Infobae has submitted a report which are diffused the economic data from 2013 of each government of each country. In the report, Venezuela and Argentina appear in first places of the countries with the highest rates of inflation.

Inflation varies by rise in prices, because evidence how much render salaries and influences the measurement of poverty index or purchasing power.

According to the report, the government of Nicolas Maduro before end the year, inflation reached 56.2% and he blamed the business sector for causing shortages and an “economic war” that impacted prices. Meanwhile, the Venezuelan opposition attributed the inflation to the “negligent” interference of state power in the country’s economy.

While in Argentina, the information indicates that prices increased overall by 10.9% during 2013. The problem is based upon the rise of the dollar, that drags the set of prices and the consultants expected inflation above 30% by 2014.