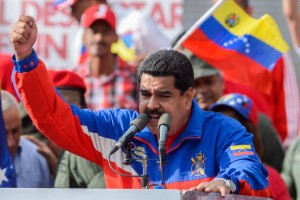 Venezuelan President Nicolas Maduro decided on Saturday, February 28, the request of a visa to any US citizen who wishes to enter Venezuelan territory and banned the entry to his country to a number of US officials and former officials, including former President George W. Bush and a group of legislators as the Senators Bob Menendez and Marco Rubio.

In addition, President of the Commission of Foreign Affairs of the US Senate, Robert Menéndez, accused Maduro of “violating human rights,” after receiving a ban to enter Venezuela.

Several heads of state who attended the official inauguration ceremony of Uruguayan President Tabaré Vázquez, expressed concern about the situation in Venezuela. The president of Ecuador, Rafael Correa, said that Venezuela faces an “economic war” and of media interest as other progressive governments of Latin America lived in the past.

For his part, Vázquez called to respect the institutionalism in Venezuela and resolve disputes by way of dialogue. He said he does not intend to interfere in internal problems of other countries but said it is necessary, as “anywhere in the world, that rights and justice exist, so residents can freely express with respect and tolerance.”