Last Sunday, the Venezuelan opposition alliance met with the three foreign ministers of the Union of South American Nations (Unasur for its Spanish acronym) appointed for the case, and explained them why they decided to suspend dialogues with the government of Nicolas Maduro, and also under which terms they would be willing to resume dialogues.

“The ministers listened to our views and now are going to talk to the government to intervene as they should (…) Let’s see the response given by the government, now the ball is in the government’s court,” said after the meeting, the secretary general of the opposition alliance , Mesa de la Unidad Democratica (MUD), Ramón Guillermo Aveledo.

Among the demands of the opposition, there is the creation of an “independent” commission to investigate the riots against the government, which began in last February and left 42 dead, over 800 injured and 252 arrested. They also call for the release of students and opposition leaders, such as Leopoldo Lopez.It is expected that throughout Monday the foreign ministers of Colombia Maria Angela Holguin; of Brazil Luiz Alberto Figueiredo; and of Ecuador Ricardo Patino, will meet with the Venezuelan government. 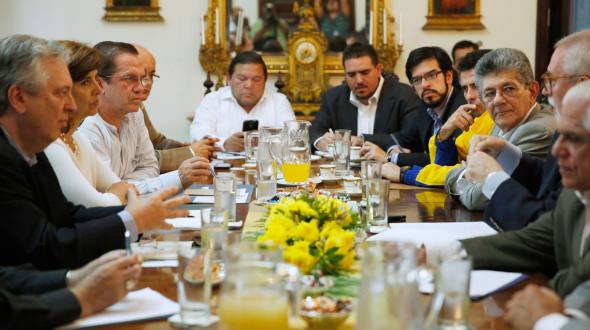 The MUD meets with the chancellors from UNASUR.