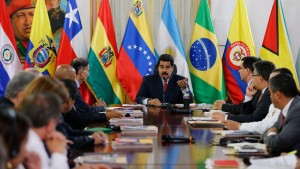 The Venezuelan opposition alliance Democratic Unity Roundtable (MUD for its Spanish acronym) reiterated this Friday, March 6 to the foreign ministers of UNASUR they will only resume the dialogue with the government of Nicolás Maduro if this liberates jailed opposition politicians.

The MUD attended a meeting with diplomats, where it made clear as a minimum condition “the freedom of political prisoners,” according to Jesús ‘Chuo’ Torrealba, Executive Secretary of the alliance.

“If they want to talk to the Venezuelan opposition know that at the negotiating table will be (the names of) Antonio Ledezma and Leopoldo López, there will be our political prisoners representing the voice of the democratic country,” Torrealba said.