The nurse Venezuelan Mariela Arroyo, 47, lives in Guayaquil since 2017. She left her country because of the economic crisis . 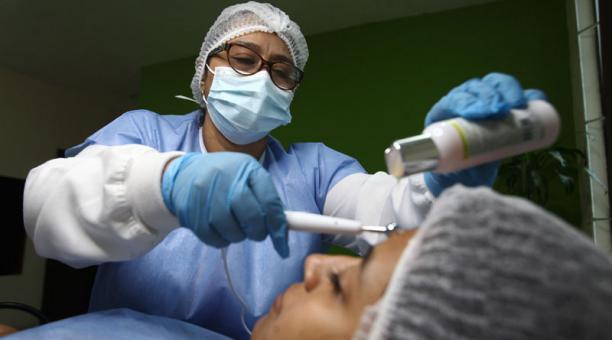 Since 2015, he planned the trip, so he carried out the procedures to arrive in Ecuador with his approved title and practice. “When I arrived in Guayaquil in 2017, I was able to register my degree and as a rural year is required here, I did it in Morona Santiago.”

Since then he has sought employment without success. “I have more than 10 years of experience and I thought it would be appreciated.” In Ecuador he has only had sporadic jobs such as placing serums or covering medical guards. In 2020 he delivered more folders because he thought that, due to the pandemic, he would have more options, but it was not like that.

The situation of Venezuelans in Ecuador was analyzed by the International Labor Organization (ILO). In the study ‘Economic sectors and value chains with potential for labor inclusion’, on March 25, it was found that 48% of Venezuelans who arrived in Cuenca, Manta and Santo Domingo have higher education.

In Guayaquil and Quito , according to a similar study by the ILO last October, 52% have higher education in the same areas.

They have problems for their labor insertion in activities according to their training and educational level , according to the study. The limitations are the lack of regular immigration status, lack of access to capital or means to undertake, the situation of the Ecuadorian labor market and xenophobia.

Jairo Rondón, 39, left Venezuela three years ago . He spent a year in Colombia and for two, in Ecuador. He has a degree in Education Sciences , but he does not get a job , despite the fact that he delivers folders to colleges and universities in Cuenca .

“I have worked in cleaning, as a delivery, gardener. I have taught a child with special abilities. Sometimes they commission me to research topics or review texts, ”said Rondón.

Thus, he supports his wife and two children . “Sometimes I want to return to Colombia, but I seek to have temporary residence in Ecuador to improve our situation,” said Rondón.

The study identified that Venezuelans receive a salary between 38% and 61% lower than Ecuadorians with the same educational level . According to the ILO , in Ecuador the worker in a situation of human mobility enjoys the same rights , duties and benefits as the national.

For the Civil Association of Venezuelans in Ecuador , there is ignorance, both by businessmen about the rights of foreigners, as well as by migrants and refugees about how to enforce their rights. “This allows labor abuses to occur, such as non-payment of overtime, late payments.”

According to Gabriel Recalde , director of the Observatory of Labor Policy , the underutilization of qualified personnel affects the productivity of Ecuador . But he stressed that now the labor market has an over-demand for employment , which makes it difficult for foreigners to find work.

Recalde said that for these foreigners to have access to a better job, it is necessary to regulate their hiring in the Labor Code , so that it can be legalized.

The Venezuelan doctor Francisco Montes arrived in Ecuador in 2015. In that year he homologated his titles as surgeon and anesthesiologist. “But now it is difficult because the surgical record is required, which in Venezuela is very difficult to achieve. Another paper that delays is that of work continuity, which details the entire academic and work life ”.

For Montes, who is head of the surgical center at the Gustavo Domínguez Hospital in Santo Domingo , the lack of these documents causes his compatriots to accept jobs with ridiculous payments .

Arroyo agreed with him. She gave up looking for work and will open a store in May to offer serum therapy and plasma . For now, her son, who lives in Venezuela, sends her money for rent and food. “He tells me not to faint.”

Supermarkets and pharmacies will not have restrictions in Guayaquil