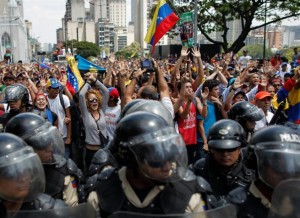 Venezuela’s General Prosecutor, Luisa Ortega Diaz, reported that at least 37 dead, over 550 injured and 81 investigations into human rights violations were registered until Friday by the violence in the protests against the government of Venezuela since over a month.

“Up to the date, the nationwide protests have left a total of 37 people dead”, of which 29 are civilians and eight are officials of the public force, Ortega said in a press conference.

In addition, 379 civilians and 180 military and police officials were injured in episodes of violence in the protests or outside them, which started on February 4 in the city of San Cristóbal , and expanded to other cities such as Caracas and Merida.

Ortega added that 168 people remain in detention and that the prosecution “has 81 investigations on alleged human rights violation”, 75 by alleged cruel and consummated murder, And 2 for attempted murder and alleged torture.