After the alert for the presence of a vessel with an international flag, heading towards the limits of the Galapagos Islands, the Ministry of the Environment of Ecuador reported that the ship is approximately 300 nautical miles from the Insular Exclusive Economic Zone and about 470 miles nautical activities of the Archipelago Marine Reserve . 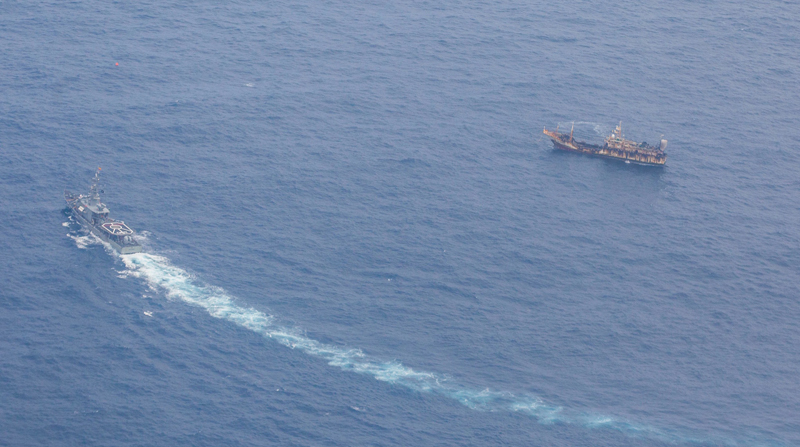 Referential image. File photo of a reconnaissance plane overflight over the Insular Exclusive Economic Zone near the Galapagos Islands.

“The Government of the Meeting works permanently to protect the sovereignty of the country. In the presence of a ship with a foreign flag in international waters bordering the Galapagos Islands , it is reported that there has been no illegal entry by the fleet into the island region, ”the General Secretariat for Communication said in a statement.

It was also reported that the National Government permanently monitors these vessels continuously and carries out air, nautical and technological controls to guarantee that they do not enter Ecuadorian waters.

“Today’s technology allows us to track where they are, the speeds at which they navigate and other characteristics with an exact level of precision, which allows us to make timely decisions,” said Gustavo Manrique , Minister of the Environment, Water and Ecological Transition .

In addition, he pointed out that, in the event that the ships breach these limits, the State will immediately identify it and the pertinent actions will be taken, according to the law.

He added that, since May 24, 2021, the Government has activated an inter-ministerial committee made up of the Foreign Ministry ; the Ministry of National Defense; the Ministry of Production, Foreign Trade, Investments and Fisheries ; the Ministry of Environment, Water and Ecological Transition and Segcom to periodically evaluate this type of situation.

“Ecuador has the necessary technology to safeguard the sovereignty of the country. Even a month ago, an agreement was established with Canada that allows for a technological tool to track ships, even when they turn off their navigation equipment. ”

The alert was issued on June 29, 2021 by the organization Más Galapagos.

“#Alerta, the first Chinese industrial fishing vessel named Shun Xing 18 is installed in the south of the Galapagos. We ask for concrete actions to guarantee that they do not enter the insular exclusive economic zone ”, they reported through their Twitter account. In the message they mentioned President Guillermo Lasso .

Eliécer Cruz , spokesperson for Más Galapagos, reported that the monitoring of the fleet was carried out thanks to Global Fish Watch. The vessels are still in international waters.

“The bulk of the fleet is about 400 kilometers west of the archipelago, it is still quite far away, but as this fleet operates is that they send one or two ships forward and once they find the squid shoals they call the rest and come all over the fleet ”.