BREAKING NEWS
The riots in the country’s prisons leave 79 dead
The cost of freight to imports brought from Asia has tripled
Ecuador, the first country in America that together with Europe will fight against the counterfeiting of medical products
Government will allow the importation of vaccines for municipalities and private institutions
62 dead after clashes in prisons in Guayaquil, Cuenca and Latacunga
Ecuadorian pianist was designated ‘Steinway Artist’ in Germany
This is how you say ‘Ecuador, a diverse country’ in nine mother tongues
Banking obtained $ 233 million in profits in a pandemic year and will reinvest profits to strengthen solidity
Arauz and Lasso go to the second round, according to official results published at dawn on February 21
The peninsular banana of the MP1 variety is sold at Walmart in the United States

Vice President Biden ensures that Obama will comply with immigration 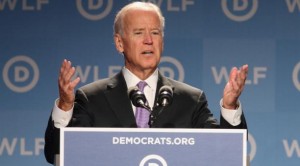 The US Vice President Joseph Biden, promised this September 22 that the Barack Obama Administration will act on immigration this year, in the event of not reaching an agreement with Republicans.

In recent weeks the Hispanic community in the United States has expressed its disappointment with Obama’s decision to postpone any executive action on immigration until after the legislative elections of November 8, in which his party (Democrat) keep playing control of the Senate.

“The president is absolutely committed to advance on immigration reform,” said Biden, when ensuring that Obama will act “with or without Congress” before the end of the year.

The riots in the country's prisons leave 79 dead