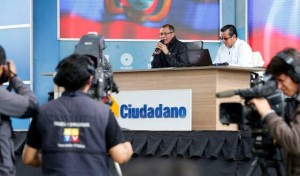 The application of safeguards to 32% of imports aims to “strengthen the dollarization,” according to Vice President Jorge Glas. In this way he defended the measure that shall fix surtaxes between 5% and 45% to a range of imported products, from Wednesday, March 11 and for the next fifteen months.

“… We must protect the amount of dollars of the Ecuadorian economy. We must take appropriate measures to strengthen the dollarization, then we will run out of dollars,” said Glas yesterday, during the weekly address he presided from Píntag, replacing President Rafael Correa, due to personal issues.

According to Vice president, this policy “is correct” and it was took for four reasons: falling oil prices, the appreciation of the dollar, the currency depreciation of neighboring countries and the imbalance in the balance of payments.

Glas assured that this is a “technical work,” appropriate to “the rules set internationally” and that will affect capital goods and non-essential commodities, which have a saveguard of 5%; 15% to medium sensitivity goods; tires, ceramics, assembly kits for motorcycles and televisions assembly have the  25%; and 45% for consumer goods, televisions and motorcycles.

Alianza PAIS held a debate to discuss the amendments