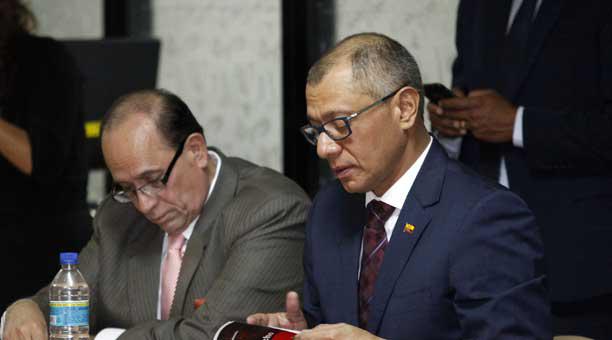 The term of temporary absence of Jorge Glas in the position of vice president ends today (January 2, 2018). And from tomorrow it can be considered as definitive absence.

Glas is detained, since October, for illicit association in the Odebrecht investigation. In cases of definitive absence the Constitution dictates that the Chief Executive send a short list with the names for the possible replacement. According to the secretary of Management of the Policy and presidential adviser, Miguel Carvajal, the list with the three candidates could be known tomorrow, once it is sent to the National Assembly. The official said, on December 28, that Moreno has consulted with the members of the Alianza País bureau and other trusted people to know his criteria.

The profile they seek to replace Glas is that of someone who “guarantees coherence and continuity with the political program” of Moreno, as well as someone who generates political stability. And he did not rule out that a woman could hold the position. In social networks, names of politicians that could replace Glas were broadcasted, one of the most repeated is the current Minister of Industries, Eva García. This newspaper communicated with the Secretary of State. She stated, yesterday (January 1, 2018), that it is “a sensitive issue” and that she will not give statements about it. Other names that are projected are that of María Alejandra Vicuña, current vice president in charge, and the former finance minister, María Elsa Viteri from the Executive was asked not to speculate with the names.

There is no date, within the Law, that forces Moreno to send a list. The President can do it when he deems appropriate, according to the constitutionalist David Ochoa. Even, Vicuña could be extended in the order until it is sent and the successor of Glas is chosen. If Moreno hands over a shortlist, the Assembly must choose the next Vice President within 30 days. Otherwise, the first one is automatically named from the list. Glas’s lawyer, Eduardo Franco Loor, sent a letter to the president of the Assembly, José Serrano, on Saturday.

The document details that article 150 of the Constitution cannot be applied, related to temporary absence or to the definitive absence of his client in office. “Therefore, there is no presidential list to be sent to the Assembly,” he said. In parallel, the Commission of Inspection is meeting today at 10:00, to know the beginning of a political trial against the Second President ordered by the opposition. It is expected that the parties will be notified this same day. Then, they will have a period of five days to present their evidence of both charge and defense. But there is a condition that could paralyze the trial. If the absence of the Vice President becomes definitive, Glas will no longer be able to be censored in the Legislative. The Constitution does not establish the political prosecution of a former president; only for former ministers.

For the assembly member and member of the Legislative Administration Council, Patricio Donoso, the impeachment must conclude as it began when Glas was in office. Defense of Jorge Glas awaits written decision In the criminal sphere, the sentence of six years in prison for the Odebrecht case against the Vice President will be appealed. However, this remedy cannot be applied as long as the ruling is not notified in writing by the Court of the National Court that sentenced it.

For Franco Loor, the lack of notification is another violation of his client’s right to defense. Yesterday, he assured that as long as that document is not sent, the defense of the Glas can not study the legal arguments that were used to condemn it. “Failure to notify is against the law, because they are already more than 15 days.” After the appeal, the Vice President has the resources of cassation and review of the sentence in the National Court. While all these legal channels are not exhausted, the sentence is not firm and therefore Glas has not lost his civil rights, such as the right to pay within the Prison No. 4, where he has been detained since last October. Nor can the State enforce comprehensive reparation. The Court ordered Jorge Glas and his uncle Ricardo Rivera to cancel USD 14 million. (I)