Video captures the arrival of Wolf volcano lava to the sea 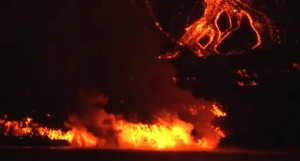 On Tuesday, the National Geographic Endeavour captured on video the arrival of lava of the volcano Wolf on the Galapagos Islands Sea.

Located on Isabela island, the largest of the Ecuadorian archipelago, Wolf erupted on 25 may, the lava reached the sea on May 29, after four days of activity.
Officials from the Galapagos National Park said that the path of lava did not affect to any of the endemic species from the island.

Security and holiday with visit of the Pope Francisco to Ecuador

Today is the day of the Ecuadorian musician