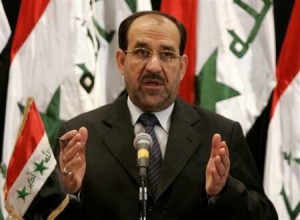 Several thousands of Iraqis took the streets demanding better government services in almost 10 cities of the country, from Basra to the north. Prime Minister Nuri Kamal al-Maliki made a televised speech on Thursday, his words urged the Iraqi people not to gather because insurgents could take advantage of the situation to carry out attacks.

Such demonstrations are a chain reaction modeled after the insurrections in Tunisia Egypt, Tripoli in Libya. The demonstrators are expressing their anger and frustration to the government because of corruption, instability and lousy public services. However, Iraqi people do not call for a new government, they are only demanding better attention.

Meanwhile Iraqi soldier fired against 250 demonstrators in Ramidi, one person died and eight were wounded. The protestors demanded the resignation of the provincial governor. In the north of Baghdad, in Salahuddin Province, army troops fired upon demonstrators injuring five of them.

Prime Minister Maliki tried to convince the people to cease the protests by saying that loyalists of the late Saddam Hussein were behind the protests. Many insurgents could seize the moment as an opportunity to instill chaos and unrest in the country.