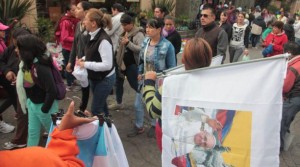 According to preliminary figures from the municipal company Quito Turismo; Pope Francis’ visit to Quito between 5 and July 8, 2015 generated $ 13.5 million.

The company conducted a survey in recent days, about 30 000 foreign tourists exclusively arrived to Quito for the Pope’s visit. They spent about $ 2.5 million for accommodation, transportation and meals during. Of these, 60% came from Colombia; 20% from Peru; and the remaining 20%, from Venezuela, Panama and Chile.

In addition, about 150 000 hikers arrived in Quito and spent about $ 3 million. These are Ecuadorians from other cities, who returned the same day (Tuesday, July 7). In the same way, city residents spent about USD 8 million in meals, transportation and shopping on the occassion of the Pope’s visit. Despite the figure reached, the city expected an income of USD 20 million. That is, about US $ 6.5 million more than what was actually reached.