Washington Pesantes: “The country requires to oversee the Government” 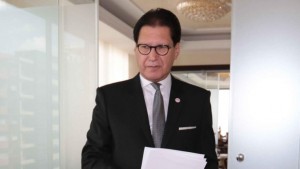 The Ecuadorian Attorney General, and now the leader of the movement “Unión Ecuatoriana” (M19), Washington Pesántez, maintained a conversation with the Daily “Expreso” regarding the future elections in 2017 and the process of the unity.

His political movement has not declared an official presidential candidate. “It will be done at the proper time, after a national convention in April. But in a future assembly reunion, that will take place on March 19th, we will analyze the possible candidates”.

About the ideology of the movement, says they will not confine themselves to ideological definitions.

“Especially to those that were not in political organizations, and changed to other affiliations. We have received the visit of those that were in Cuenca, some workers, and left-wing activists. We have heard them all”, Pesántez added. He also mentioned about the unity planted by some right-wing organizations.

“A change to disassemble the scaffolding created by the Government to control, prosecute and disrepute. Let’s start with the Constitution and let’s finish with the infinity of laws that have been created. Additionally, the country needs to oversee the acts of the Government, who currently functions without any repercussion”. (I)