Ways to control local governments in the Assembly committee are discussed 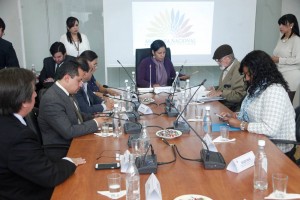 The Oversight Committee of the Assembly discusses how to exercise control over the authorities of the autonomous governments (GAD), announced its president, Maria Jose Carrion.

According to the figures, in 2014 398 control actions were performed to GADs: 229 to municipalities, 146 to parish councils and 23 to prefectures. And dismissal resolutions were also issued against 18 mayors from different affiliations.

Carrion explained that the Assembly itself would have such jurisdiction because the Constitution states it can oversee the actions of some specifically named entities and “other public bodies.”

The lawmaker admitted that the Code of Land Management (COOTAD) states that no one can interfere in the autonomy of GADs, but it can do it in control areas.

But the prefect of the Loja province, Rafael Davila (CREO), said that the political control of the Assembly to local governments violate their administrative autonomy.

This is because, according to the authority, the GADs have their own internal audit bodies: the provincial chamber in the case of prefectures, and the county council in the case of municipalities.