The last resort for the 20 people sentenced for bribery in the Bribery case is cassation . The Comprehensive Organic Criminal Code ( COIP ) in article 656 says it is an “extraordinary” lawsuit , which aims to review the legality of the sentences issued. 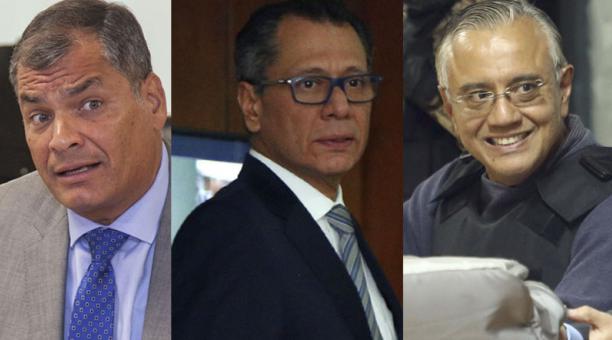 The co-judges Lauro de la Cadena, Milton Ávila and José Layedra must convene a hearing to discuss the case.

Below we detail the legal status of each defendant.

He is a fugitive in Belgium. There is an arrest warrant in force against him nationwide.

serving a sentence for illicit association in the Odebrecht case. Due to bribes, the preventive detention order has already expired. In other words, if he completes the sentence for Odebrecht or receives pre-release, he can leave jail, because in Bribes there is still no final sentence.

He has been under house arrest for a year and a month in Guayaquil. Before, he spent 30 days in jail, but appealed to jail.

fled the country in June 2019, when the Police raided his home in Guayaquil. There is an arrest warrant in force in the country. Its last known location is Venezuela.

entered the Argentine Embassy in Quito on August 12, 2020. Since July 2019, she has been wearing an electronic shackle. In November of that year she tried to get a judge to remove the device, because she said that her legs were swollen, but at the hearing she did not present medical evidence.

She is in Guayaquil and does not have an arrest warrant, as she has requested the cassation of the sentence. Until this appeal is resolved, she will remain free.

He has no arrest warrant, as he has voluntarily submitted to the versions. He is in Guayaquil and is prohibited from leaving the country.

The date of his departure from Ecuador is not known. He is in the United States and has a resident visa. An arrest warrant in Ecuador weighs on him.

is free and has an electric shackle. Must serve 32 months and 19 days of sentence. In addition, she is in the Victim and Witness Protection program.

is free and has an electronic shackle. At the last appeal hearing, she received a reduction in her sentence. It went from 19 months to three months and six days. She has already completed that sentence, but the sentence has not been carried out, because she requested cassation. In the latter instance, he hopes that his innocence will be recognized.

He is on the run. He has an arrest warrant in Ecuador and a red broadcast from Interpol. Its last location is the United States.

has an arrest warrant in the country. His whereabouts are unknown. He hails from South Korea.

Alberto Hidalgo, Víctor Fontana, Pedro Verduga, Teodoro Calle, Bolívar Sánchez, Édgar Salas, Rafael Córdova and Ramiro Galarza are prohibited from leaving the country and must appear periodically in the National Court and in the Guayas Court of Justice for those who live in that province.