When the lockdowns caused businesses, airports, factories, schools and houses to close their doors to mitigate the severity of the covid-19 pandemic, the economies of Latin American countries felt the blow. 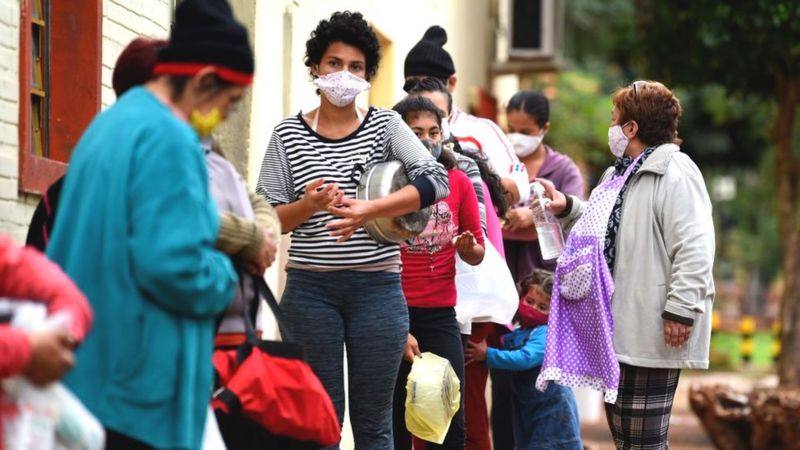 The brutal economic contraction in the region last year was accompanied by a drop in the prices of goods and services paid by consumers.

Although the downward trend comes from 2016, the fall in prices was much more pronounced during the pandemic, with a regional average of 2.7% in September, (compared to the same month last year) and excluding Venezuela and Argentina due to its chronic inflation problems (hyperinflation even in the Venezuelan case).

What influenced the fall in inflation?

A mix of factors, among which are the measures to face the pandemic, the sharp contraction in demand, the fall in prices at the international level (particularly in the energy sector), supply problems and the increase in exchange rate volatility, Pineda argues.

Benjamin Gedan , deputy director of the Latin American Program at the Wilson Center and professor at Johns Hopkins University, explains that the drop in prices occurs in a very complex context for Latin America.

“It is not surprising that inflation has remained low in the region given the devastating economic impacts of the pandemic, ” Gedan tells him in a dialogue with BBC Mundo.

So devastating that the region’s Gross Domestic Product (GDP) in 2020 would reach a historic contraction not seen in decades (which may be in the range of 6.9% to 7.7%, according to the latest World Bank estimates and of the Cepal).

Although average inflation has fallen, there are many variations within Latin America. In countries like Costa Rica and Nicaragua, the decrease in the consumer price index (CPI) was at least two percentage points, while in others like Guatemala, Mexico, the Dominican Republic and Uruguay, there was an increase equal to or greater than 1% .

And Venezuela – the other major regional exception – also registered a decline, but in any case its year-on-year inflation in September exceeded 1,800% .

There is no single inflation

Economists often analyze different types of inflation, to get a more accurate idea of ​​how prices are evolving in different sectors of the economy.

For example, the price of services fell sharply by 1.4% in September, reflecting the effects of social distancing measures on the sector, as well as the effects of lower fuel prices on the transportation sector. 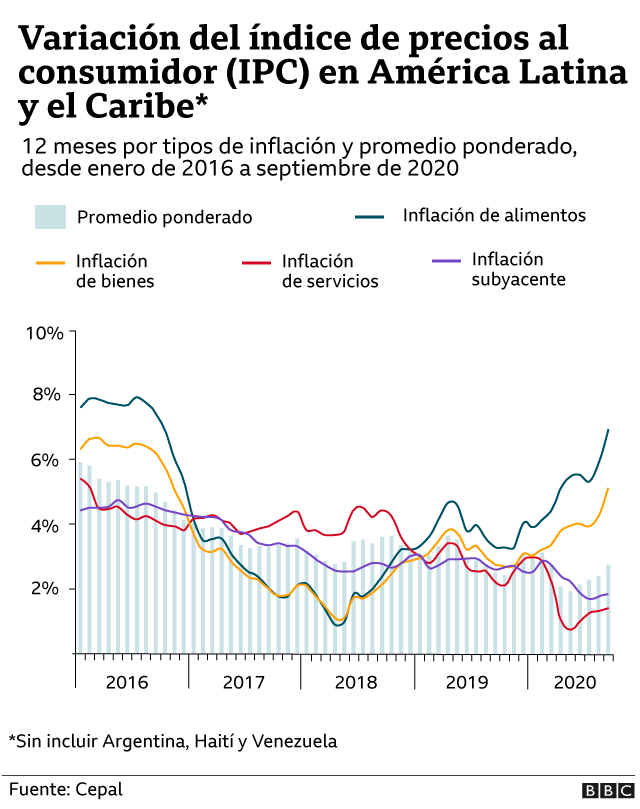 In fact, the collapse in oil prices at the beginning of the pandemic had a direct impact on the evolution of prices globally.

The so-called “core inflation” also showed a fall , an indicator that excludes the direct impact of the most volatile products, such as food and energy.

In contrast, inflation of goods and inflation of food increased in Latin America , soaring to 6.9% in September.

This increase in food prices is a trend that began before the pandemic and that has been consolidated in recent months. 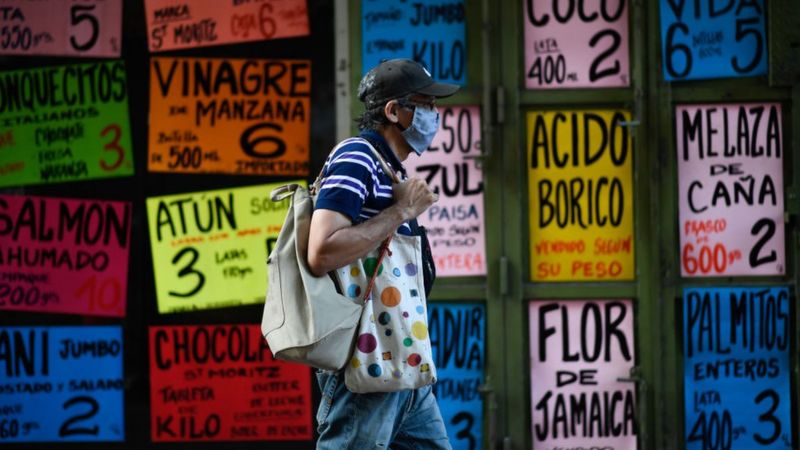 Unlike the fall in the prices of a basic food basket, food inflation increased in the region.

And where the price of food increased the most in 2020 was in Brazil, Chile, Guatemala and Mexico, apart from Venezuela, which has dragged on a generalized problem of hyperinflation for years.

The rise in food inflation, says Pineda, is explained by climatic factors, problems in the supply chains of inputs and growing exchange rate volatility.

Relatively low inflation, such as that seen in the region, “means that central banks in Latin America can keep interest rates at a low level for most of 2021,” says Elijah Oliveros-Rosen , an economist to BBC Mundo. Senior of the Latin America Global Economics & Research division of the New York-based consultancy S&P Global Ratings. 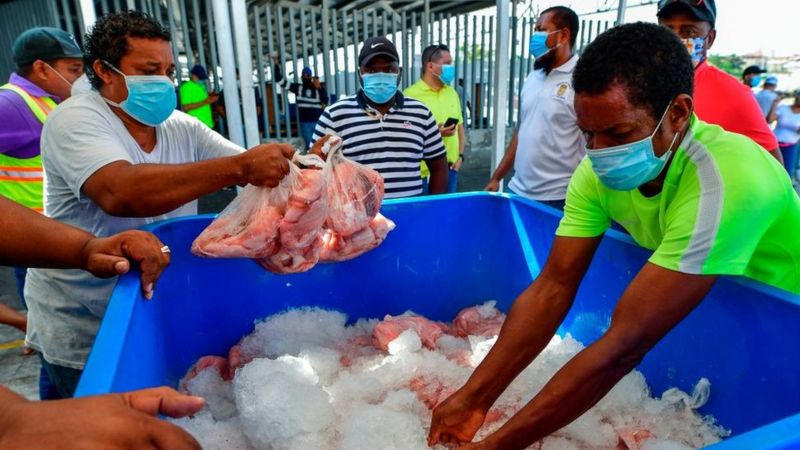 Panama registered the lowest inflation in Latin America with -2.4% in September.

So far, the region’s central banks have been cutting interest rates to historically low levels and injecting liquidity into the economies to support the recovery in demand and drive an economic recovery.

And many economists agree that low rates, also known as “cheap money , ” will continue in the region for a long time to come, precisely because there is no significant upswing in inflationary pressures. 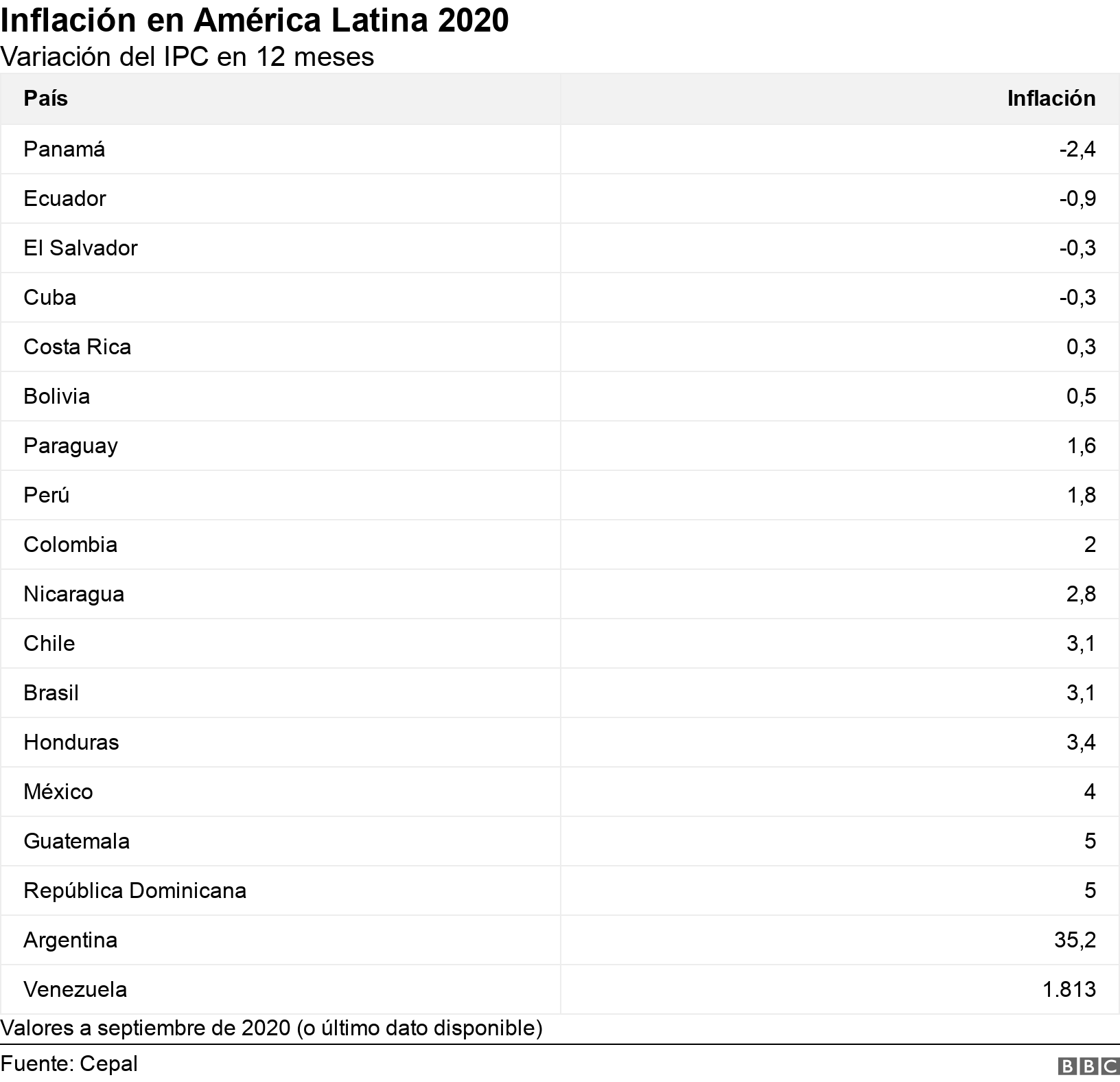 The backdrop, Oliveros-Rosen warns, is that the recovery in most of the major Latin American economies will likely be “one of the slowest in emerging markets . “

This is due, he adds, to the severity of the damage to the labor market caused by the pandemic and to the dynamics that investments have shown. And in some cases, to the economic weaknesses of the countries prior to the crisis of 2020.

Other experts agree with the forecast.

“Inflation will not be a challenge for most governments in the region, despite low interest rates and large deficits,” argues Benjamin Gedan of the Wilson Center.

Projections from international organizations suggest that in 2021 there would be a recovery with regional economic growth close to 3.7%, although everything depends on how the pandemic evolves and the availability of vaccines to protect against covid-19. (I)