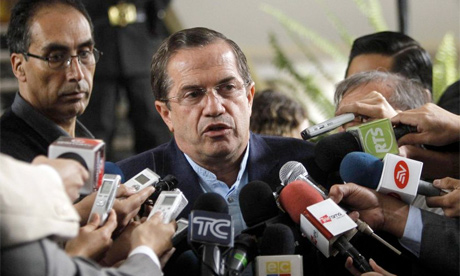 One of the offices of the U.S. Embassy in Quito revealed a new cable from Wikileaks which ratified that Ricardo Patiño, former political director and current Foreign Minister of Ecuador, could have been the one who obtained and administered funds in 2006, for presidential campaigns of Rafael Correa.

According to the report by U.S. diplomats sended to Washington, “reliable sources” revealed that the funds were handed over by the Venezuelan government

In addition, they reported that Patiño had also applied for money from the Revolutionary Armed Forces of Colombia (FARC) for the same season and have won the support of members of disappeared subversive groups Alfaro Vive Carajo (AVC).

Another cable, which originated in the U.S. embassy in Madrid N º 81 813 (13/Oct./2006) account of conversations between Spanish officials with Deborah McCarthy, U.S. coordinator of Affairs of Venezuela, where he mentions “lots of money flowing from Venezuela to Correa’s campaign.”

The cable “Secret No. 244,780, dated January 27, 2010, recounts Patiño’s political career, his public charges, its proximity to the Ecuadorian president and active participation in social movements. The most controversial of the episodes was as Minister of Economy, for the above case of “Pativideos” regarded as “degradation” and the alleged manipulation of the international bond market.

Daniel Betancourth Will Give An Online Unplugged Concert