Established in February 2020 with a capital of only $ 500, the associative company Manglares Unidos del Sur Ecuador (Mansur del Manglar) has managed to convert, in 19 months, 400 partners dedicated to the collection of red crab and shells into prosperous entrepreneurs. 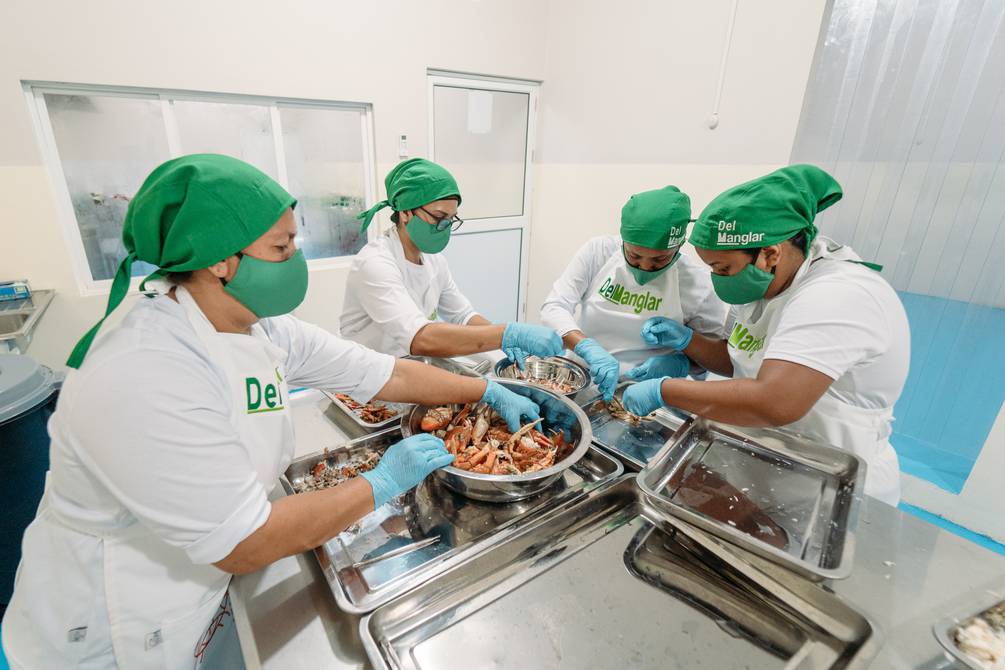 The pulping and vacuum packing process is carried out in the four plants owned by the crab and shell collectors. A fifth floor is under construction.

Pedro Lizarzaburu, representative of the company, recalled that the firm was born from the union of the Nuevo Porvenir, Seis de Julio, Balao and Las Huacas associations, and that the idea of ​​associating was born in 2017 through the project ‘Competitiveness of Communities Mangrove Concessionaires in the Gulf of Guayaquil ‘of the Heifer Foundation and the Inter-American Development Bank (IDB LAB), entities that have also provided training, equipment and resources.

“In summary, the project began with $ 10,000, $ 60,000 in equipment, $ 120,000 training, among others,” specified the leader, who highlighted that the crab-makers and shellfish deliver, thanks to the industrialization process, value-added products such as vacuum-packed crab pulp and nails, and shell pulp, which are processed in the three crab pulping plants and one shell plant owned by the harvesters.

The company began production last June and its products are currently marketed in Guayaquil, Samborondón, Quito, Ambato, Cuenca, Portoviejo and in the province of Santa Elena, through distributors such as Mercadozona, Star Fish, Alicon, Cangrejo Express and Fernando. Ramirez.

In addition, they are suppliers to the La Pata Gorda restaurant chain and will soon be in supermarket chains; and they do not rule out reaching international markets, as they already have orders for the United States, Spain, Italy, Ukraine, and interested parties in Canada.

Regarding production capacity, Lizarzaburu assured that in three days a week they produce 360 ​​pounds of crab pulp and 120 covers of 6 nail units, although production can be increased with more labor, he said.

Regarding the shell, they have the capacity to produce 300 pounds, productivity can also be increased, according to the leader, noting that for this purpose a fifth plant is being built with the support of Petroamazonas.

However, despite the fact that the crab and the shell are its star products, the company diversifies its portfolio and offers more alternatives such as mangrove honey through beekeeping, an activity on which they focus especially when there are closed periods. of crabs.

“It is an alternative activity that helps reduce the pressure of the mangrove and that for most organizations is new,” revealed Lizarzaburu, who indicated that the first harvest of honey was in August 2021 with 83 liters, however they project reach 800 liters.

They also process crab flour; each crab pulp processing plant produces approximately 20 kilos per week that is obtained from the processing of crab waste or exoskeleton.

“As pulp production increases, so does the processing of crab meal, which can be used in the food industry, as well as in the cosmetic industry and others,” said Lizarzaburu. (I)