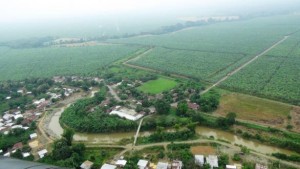 The worker-owners of Hacienda La Clementina, that formerly belonged to businessman Alvaro Noboa, reject the $ 40 bonus compared to the monthly salary earned by the administrators.

Over a thousand claimants, who gathered yesterday at the Coliseum area, told the administrators they want a bonus of a unified basic wage ($ 354), so they offered to study the possibility of increasing the amount established.

“Paying them a bonus of a basic salary is impossible,” said Carlos Ordeñana, manager of the Cooperation of Production and Marketing La Clementina (COOPROCLEM), which groups 1,745 workers who in 2013, with a loan of 78 million dollars granted by the National Finance Corporation (CFN), bought the property seized by the Internal Revenue Service to Alvaro Noboa.

The payment of the efficiency bonus ($ 40) generates an outflow to the cooperative of nearly $ 100,000 in the annual budget.