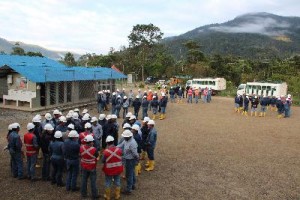 The work activity in the mining camp in El Panqui, Zamora, was stopped by 150 workers and consequently the Viewpoint project stopped. The Chinese company Ecuacorriente (ECSA) reported the incident last Saturday night .

The Viewpoint project is a large scale work in Ecuador and it is about 2.9 tons of copper. The contract to start the exploitation was signed in March 2012.

In a statement, ECSA lamented that because of interests of employees the project is delayed. Furthermore, according to the mining project, workers were not the only who participated, people outside the Company did so.

The Legislator of the province, Pepe Acacho (from the Pachakutik party), posted on his Twitter account a different version. He said the measure was taken by the illegally dismissed workers, who live in the neighboring parish of Tundayme.

The relationship between the Chinese company and the community of the San Marcos neighborhood has not gone well in recent weeks. Locals reject the demolition of the church and the school sector of the sector. The complaint was made even at the last meeting of social organizations in Tundayme, where Carlos Perez, President of ECUARUNARI, said they would continue to fight extractive government policies.

The exploitation of copper will generate $20,000 million dollars. The State will receive 5.400 millions and 100 millions will be disbursed by Ecuacorriente in advance royalties. A first payment of 40 millions was made in December 2012. This money will be used, according to the Government, for the development of communities in the area.