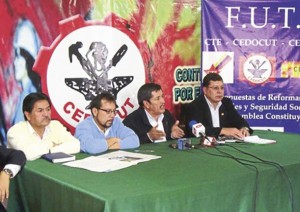 The unions of workers warn of a national strike as a response to the process of constitutional amendments in the Assembly. Regarding whether the Legislature decides to approve the two proposals that deal with labor issues.

The opposing unions grouped in the United Workers Front (FUT for its Spanish acronym), warned the government they will mobilize on the streets of the country.

The draft amendment intends to include the workers of state companies to the same regulations that govern the bureaucracy: the Organic Law of Public Service. This would cause they are no longer protected by the Labor Code, which grants them various benefits.

Mario Morán, Secretary of the Federation of Free Workers of Pichincha, explained that with these amendments, he would also lose job security. As well as some benefits, such as uniforms, food, among others will be decreased.