Workers will resume their fight in a key date 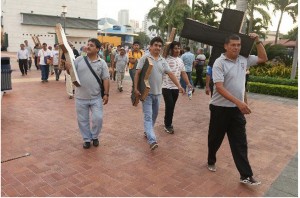 The working class and the ruling party yesterday fought one more of the battles held during the “Year of resistance,” as labor movements called 2015. And, facing the second and final debate on constitutional amendments in the National Assembly, labor movements promise to open new scenarios of confrontation, including a new national strike called for Thursday November 26.

In November 15, 1922, dozens of workers were massacred and, according to history, thrown into the depth of the Guayas river, this event revives each year without further connotation. In the center of Guayaquil, near the former cacao zone, where most of the civilians were shot, there are no commemorative traces or citizen interest.