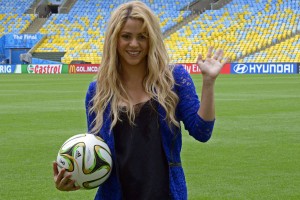 Singing in the World Cup final is very important because it is the culmination of one of the most watched sporting events on the planet.

The official theme of Brazil’s 2014 We are one, in which the voices of Pitbull, JenniferLopez and Claudia Leitte are heard, but did not have the expected acceptance. Something tha twas noted even in the opening ceremony, in which the three artists were unable to fill with enthusiasm or dramatizing the act.

While reproductions on YouTube of We Are One exceed 180 million other single is the one that takes the crown in the World Cup: La la la from Shakira.

Shakira is the highlight of today, after the International Federation of Associated Football convene again with her to sing in the World Cup final, after the ones in Germany 2006 and South Africa 2010.

She was the last to join the list of great artists who will be at Maracana Stadium before Germany and Argentina play. Shakira will take the stage with Brazilian artist Carlinhos Brown, with whom he recorded La la la.

Among the other international figures is the famous guitarist Carlos Santana, who along with artist Wyclef Jean, who is also the history of World Cup Germany 2006 accompanying Colombian, and Alexandre Pires, which puts a local touch, will sing Dar um jeito.

In addition, to the three of them will accompany the music composition of one of the figures of the electronic environment of the time, the Swedish DJ Avicii.

Pires and his compatriot Ivete Sangalo and the group GRES Academicos do Grande Rio, with a show of samba, complete the concert poster for the final, as published by AFP.