The militancy of the Pachakutik movement concentrates its electoral vigil in the province of Guayas . The presidential candidate, Yaku Pérez , arrived Wednesday morning 10 February 2021 the Delegation Electoral Provincial to ascertain the review of records with new features for the dignity of Presidency and Vice Presidency of the Republic. 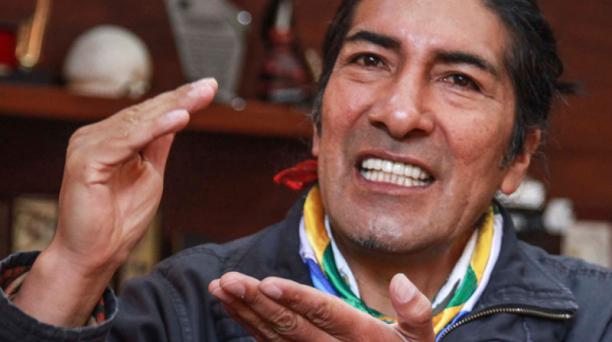 According to data from the National Electoral Council ( CNE ), at the country level there are 1,474 minutes with news until 10:00 this Wednesday; of them, 1 218 correspond to Guayas .

Pérez arrived at the Delegation accompanied by supporters , who waved the multi-colored flag of the indigenous movement.

The president, in statements to the press, recalled that after a meeting with international observers and members of the CNE it was agreed that the results would be ready until noon today.

“Oh surprise, they suspended the recount. Why? Because we denounced last night and early in the morning a fraud was being prepared. The communities of the people are upset, Pachakutik made a call, I have spoken this time with my colleagues from Pachakutik, we are going to exhaust all legal instances , we only want peace, we want peace .

Pérez assured that they do not agree with mobilizations that could disrupt public order and peace.

“The people are outraged to see how they shamelessly steal our votes, we have had several calls asking to mobilize , I have told them: Please, comrades, let us be calm, we want to exhaust all legal instances; I do not want that because of the CNE there is an uprising ”.

He also criticized that there are minutes that have violated stamps and other irregularities. “It is absolutely targeted.”

The candidate for Carondelet added that there was a blackout in the Electoral Delegation of El Oro . “There is precisely the fraud, there they cooked. The blackout was also going to happen Guayaquil, so seeing that the population began to open its eyes (…) what they are doing this time is playing with fire ”.

Pérez concluded by ratifying that he will be in the second electoral round : “we are not going to be defeated (…) we arrived, we arrived, it is irreversible.”

Finally, regarding a possible support for Guillermo Lasso, he goes to a second electoral round, Pérez said: “How are we going to support corruption. If Guillermo Lasso goes to the second round, it will happen with fraud and corruption, I sharply detach myself from corruption, even if it is a colleague of mine ”.