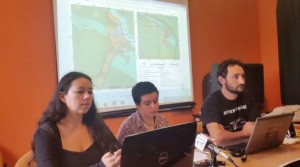 The collective YASunidos will start a campaign called ‘Eye on Petroamazonas,’ a citizen observatory that will monitor the work done by the state company Petroamazonas in the Yasuni area.

According to a team member, David Suarez, this campaign includes two edges: to present doubts and comments to the Environmental Impact Study (EIA) of the Tiputini and Tambococha fields, carried out by the state oil company.

The second axis of the campaign is to make visible cases in which not only the environmental effects are shown, but also the rights of individuals.

Amanda Yépez, Geographer of the group, explained part of the investigation and affirmed that using the EIA official information, a simulation of the possible effects of the ITT project was made, which would be of 54,800 hectares by roads opening, pipelines and placement of platforms for  exploitation.