According to Vice President of the National Electoral Council (CNE for its Spanish acronym), Paul Salazar, the environmental group YASunidos would count with about 600 thousand signatures that meet the minimum requirements of the ten digits of an identity card, which would lead the initiative to a new and last phase of verification to be held during the next 15 days.

However the official also highlighted that in the last process of verifying signatures, they found inconsistencies in names and the number of digits of identity cards, since many of the signatories would not have ten digits.

Ramiro Avila, attorney of the group and representative of the high-level committee formed by that group, said the strategy used by the CNE was to rule out, over shape issues, thousands of forms for their size or for mutilations on them.

According to Avila, authorities should revise the signatures one by one because it represents the “will of every citizen” and asked the CNE to publish the names and identification numbers of those who think that their membership is in doubt, for those people to come to the offices of the CNE and be able to challenge the headings. 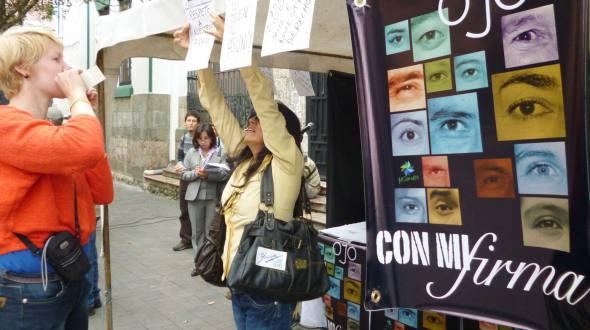 Members of YASunidos keep watch outside the CNE.