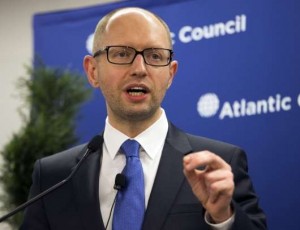 The Acting Prime Minister of Ukraine, Arseniy Yatsenyuk, accused Russia of fomenting protests in eastern Ukraine, as part of a plan to send Russian troops to their country.

Yatsenyuk said this Monday at a meeting with his cabinet that Moscow was trying to `dismember´ Ukraine.

Ukraine has sent security officials to the cities of Luhansk, Kharkiv and Donetsk in the east of the country, after the occupation of government buildings by pro-Russian groups during the weekend.

In Donetsk, the people who took the building of the regional administration have announced the creation of a sovereign state or `people’s republic´ independent from Kiev.

For his part, the Minister of Domestic Affairs of Ukraine, Arsen Avakov, said that several people, whom he described as `separatists´, had been removed from an administrative building in Kharkiv.